Words are important. We quickly learn as children to move our hand from the hot stove because the blisters and burns were so painful that one time we didn’t. At the library we understand what they mean by quiet! It means no talking. Not even whispering into your cell phone “for a quick minute!” The definition we give to words informs our attitude toward them.

For a long time, the words humility and meekness have looked a certain way in my mind. Shy. Quiet. Doormat. Insecure. There was also the notion of putting others first and thinking of others more than I think of myself. Essentially, I had a blend of some negative connotations, peppered with a few grains of biblical truth.

Overall, humility and meekness embodied undesirable traits to emulate. The end result was unattractive and didn’t look successful (which was very important to me), and I felt guilty to be unable to produce these traits in my own character. I suspect I’m not alone.

Letting the Bible Shape Our Definitions

“What does the Bible say?” is usually my favorite question to ask myself when faced with a challenge. I’m ashamed to say it was not one I initially used to question my own faulty narrative regarding these two character traits. Nonetheless, Scripture came to my rescue.It was a deep-dive into the letter Paul wrote TItus that helped me see I’d misunderstood humility and meekness. The language both challenged and enlightened me. Because that’s what Scripture does: It brings light to things otherwise hidden.

Titus 2:15a reads: “Declare these things; exhort and rebuke with all authority.” The verse stopped me in my tracks. An inner dialogue of sorts began inside my head. Declare, exhort, rebuke; these are all strong action verbs, I thought. These are not actions to be carried out by someone who was a doormat or insecure. They require confidence. Yet, we are called to be humble. What does it look like to declare, exhort, and rebuke, while remaining meek? How does that even work? Scripture had my full attention. So I kept digging.

Letting the Bible Explain the Bible

When you are a Christian, you will feel the tension between the life we currently have here and the one we are headed to in glory. In practical terms, this means we will live in the tension of familiarity that becomes strange as we grow in our faith, and strangeness that slowly becomes our home. The Bible calls us exiles. Because that is exactly what our status is: Exiled from our true home.

I’d misinterpreted what humility and meekness meant. How? Like so many, I learned early in adulthood to define success and confidence through the world’s definition. To succeed and be confident meant to be strong and self-reliant. Weakness was not admirable, nor did it lead to success. Weak is who the winners ate for breakfast.

But here’s a quick look at what the Bible says about meekness:

From the lips of Jesus, when he spoke the beatitudes: “Blessed are the meek, for they shall inherit the earth.” Matthew 5:5 (ESV)

Written by David, roughly a thousand years before Christ: “But the meek shall inherit the land and delight themselves in abundant peace.” Psalm 37:11 (ESV)

These verses, separated by a millenia and similarly worded, are pointing to a promise. One prophesied by a shepherd who would be king; the other preached by the King who came to shepherd. Who is the promise for?

Since the Old Testament was written in Hebrew and the New Testament in Greek, it’s worth looking briefly at the vocabulary employed to make this promise. In Hebrew, meek means “…of a lowly, pious, and modest mind, which prefers to bear injuries rather than return them…”1

As for the Greek meaning, we find: “…that the meekness manifested by the Lord and commended to the believer is the fruit of power. The common assumption is that when a man is meek it is because he cannot help himself; but the Lord was ‘meek’ because he had the infinite resources of God at His command.”2 The confidence displayed in the meekness of Jesus is “neither elated nor cast down, simply because it is not occupied with self at all.”3

Letting Jesus Show Us the Way

Lest we forget this conversation.4 When Jesus was outlining his purpose for the disciples saying: “I will come again and will take you to Myself, that where I am you may be also. And you know the way to where I am going.” Thomas interjects: “Lord, we do not know where You are going. How can we know the way?” And Jesus said, “I am the way, the truth, and the life.”

Essentially, Jesus was saying: Look to me for how to live between now and when you arrive home.  Jesus’s life, words, and attitude provide a real-life example of what meekness and humility look like. Because he embodied humanity in his own flesh, we can find clarity in his life where our definitions fail us.

So, herein lies the paradox. Humility embodied in Christ looked like a man who ordered storms to cease and left his closest friends scratching their heads wondering what kind of man he was, who could command obedience from wind and sea.5 Indeed, meekness is lived out in the Lamb who stood before worldly authorities and did not seek his own defence. Yet he affirmed his identity when he declared at his friend’s funeral, “I am the resurrection and the life” (John 11:25-27), right before bringing  that friend back to life in front of everyone present.

In Jesus; God made flesh, we see meekness with power that declares Who he is, rebukes even stormy waters, and exhorts men with authority and life-altering love. The same man who overturns tables in anger also bends down to wash the dirty feet of twelve men, including the one who would betray him. Indeed, what man is this? Jesus. That’s Who.

Jesus was not shy, and he was certainly not insecure. We think doormat and roll our eyes when we remember that as Christians we are told to turn the other cheek. But in Jesus, meekness looks like surrender. He could be bold because he had nothing to prove; he knew exactly who he was. He was a King who had come to save others by doing for them what they could not do for themselves. He was confident in the One who sent him, and therefore did not feel insecure when others questioned, doubted, or even abused him. He felt hurt, yes. But his identity never wavered.

Jesus’ whole life was example after example of turning the other cheek. Not a doormat, but more like a doorway. Instead of walking on it, he invited all to walk through it, so they could be made new. He loved us beyond all measure to the point of death, so we wouldn’t have to die.

When I think ‘doormat,’ I think of someone who lets others take full advantage of them –  Someone who doesn’t think their personhood deserves or should demand any regard from others. Yet Jesus, being truly man and truly God, understood his worth plainly. He wasn’t letting others take advantage of him. He was simply fulfilling the purpose for which God the Father sent him. His life on earth was entirely surrendered. From Bethlehem to Gethsemane, his life was willed by the Father. Meekness is the confident obedience to surrender our rights to ourselves and live under the lordship of Christ. Humility as lived out by Jesus is otherworldly power contained and joyfully submitted for others’ sake.

Do we dare live like this? Yes! Because when we are meek, we no longer make this life our personal pursuit of happiness and self-actualization. That often leads to an exhausting chase after perishable things that consume without giving life. The source of our joy comes not from fighting to have our way, but from following His. And the astounding result is that in the process, we end up uncovering our true self and worth. We are strong. Strong enough to declare, exhort, and rebuke, without the personal agenda for self-affirmation. Strong enough to bear injuries rather than injure. True strength is found when we become meek and reflect our Savior. 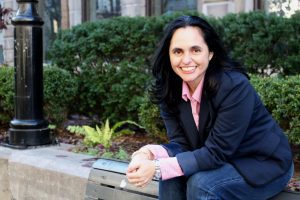 About the Author: Paola Barrera was born in Spanish, lives in French, and thinks in English. She loves words and uses them as arrows to point to the best words she knows — those left by our Maker and found in Scripture. Her aim: to think biblically about all of life. She’s a writer, speaker, and mentor. She blogs at WordsOutloud.net where she writes from the intersection between everyday life and eternal perspective. Canadian through the gift of immigration, she and her husband Gustavo call Montreal home. You can find her on twitter @Paola_BarreraR and Instagram @paola_m_barrera.

Podcast 018 – “Maslow’s Theory of Self-Actualization & What It Means For Us” with Marilyn McGraw
Podcast 019 – “Hope & Healing: How Trauma Impacts Our Story” with Marnee Alfson

Sixteen year-old Arden Windus is our last guest in

These words of wisdom from 14-year-old Kate Kesler