We just finished the last jar of homemade strawberry jam and are anxiously awaiting the new crop of strawberries.  It promises to be a good crop this year because of just the right mix of sunshine and rain.  My 94 year old mother and I make enough to fill the freezer, supplying all the siblings and grands (and now great-grands) with sweet jam throughout the year.

So we wait excitedly for the crop of the first-fruit of Pacific Northwest strawberries and then the bounty that will come.

There is great meaning to the term first-fruits in scripture and it is mentioned in both the Old and New Testament.  There are seven Feasts ordained by God for the Hebrews to follow listed in Leviticus, chapter 23.  Four in the spring and three in the fall.  And each of the Feasts signified something that had happened in Jewish history but is also a glimpse of what was or will happen in the future.  They point to Christ, they were fulfilled by Christ or will be fulfilled by Christ, in the age to come.  God’s entire plan of salvation is outlined by these feasts which are also related to Israel’s agricultural seasons.

The Feast of Passover, in the spring, is the start of three feasts over eight days: Passover, Unleavened Bread and First-fruits. Passover enacts the night the angel of death passed over the Jewish homes that had been marked with the blood of a lamb, but did not spare the houses of the Egyptians. It stands for justification by faith in the blood of the Lamb.  Jesus ate the Passover feast on the evening He was arrested and He died at 3pm the next day, the same time as the daily evening sacrifice of the lamb at the Temple.   In 1Corinthians 5:7b Paul tells us “For Christ, our Passover lamb, has been sacrificed.” (ESV)

The following day the Feast of Unleavened Bread begins and lasts for seven days.  Historically this was when the Hebrews left Egypt, it signifies that they left in haste not having time for bread with yeast to rise.  Yeast in the Bible is symbolic of sin, so unleavened in Hebrew (matzah) means sinless, and is a picture of Jesus, the only human without sin.  This is the time Jesus spends in the grave, He who conquers the grave, He who had no sin is the Bread of Life.

Next comes the Feast of First-fruits: Then the Lord spoke to Moses, saying, “Speak to the sons of Israel and say to them, ‘When you enter the land which I am going to give to you and reap its harvest, then you shall bring in the sheaf of the first fruits of your harvest to the priest.  ‘He shall wave the sheaf before the Lord for you to be accepted; on the day after the Sabbath the priest shall wave it. (Leviticus 23:9-14 NASB).

It’s significant to remember that the Feast of First-fruits was instituted when the nation of Israel was still wandering in the desert eating Manna. It was observed in faith and obedience that God would lead the people to the land of ‘milk and honey’ he had promised.  After settling in Israel, no grain was to be harvested until this offering was brought before the Lord.

The Feast of First-fruits was a way for Israel to convey to God that all good things come from Him and that everything belongs to Him. It was also a way of expressing trust in God’s provision; just as He provided the first-fruits, so He would provide the rest of the harvest. Jesus arose from the dead on this day.  His resurrection was like a wave offering presented to the Father as the first-fruits of the harvest to come.

“But now Christ has been raised from the dead, the first fruits of those who are asleep. For since by a man came death, by a man also came the resurrection of the dead. For as in Adam all die, so also in Christ all will be made alive. But each in his own order: Christ the first fruits, after that those who are Christ’s at His coming”, (1 Corinthians 15:20-23 NASB)

So while first-fruits speak of a harvest of crops it also speaks of a spiritual harvest.  In Jeremiah 2:3 “Israel was holy to the Lord, the first-fruits of his harvest.” (ESV)  Israel was to be a promise of a greater harvest, as she would experience God’s redemption and then be a witness of this redemption to the nations; that they too might come to know the God of Israel.

And it’s expanded in the New Testament where Paul uses the Greek term aparche, which is an agricultural term to show we will be like Christ.  Just as first-fruits indicate what the harvest will be like, all Christians are dedicated to God in the manner of first-fruits.  We are told in James 1:18, “Of His own will He brought us forth by the word of truth, that we might be a kind of first-fruits (aparche) of His creatures.”(ESV)  We need to be mindful, just as God wanted Israel to be mindful, that we are redeemed and are to be a witness to others of that redemption.  In Romans 8:23 Paul says that as redeemed people we possess the “first-fruits (aparche) of the Spirit.” (ESV).  Just as the first-fruits of the harvest provide hope for the future, the fruit which the Spirit produces in us now provides hope that we will one day be like Christ.  The Feast of First-fruits is today our Easter.

Lastly, is the Feast of Pentecost, which means 50.  This was celebrated fifty days after the Feast of First-fruits, to commemorate the end of the barley harvest.  It was on this day the Holy Spirit came and the fearful disciples became bold men and the first of the spiritual harvest came in when 3,000 Jews heard the Gospel, believed and were baptized.  Two loaves of bread were offered as sacrifice in the Temple, on this day.  The number fifty signifies freedom and liberty. The number two signifies the number of witnesses, in this case both believing Jews and Gentiles that make up the Church, thus fulfilling the Feast of Pentecost. 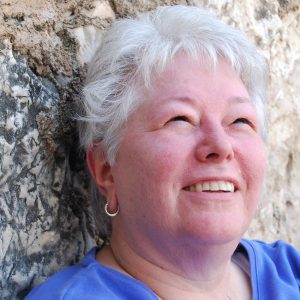 About the Author:  Ellen Newman was a registered nurse for 45 years and is living proof that you are never too old to go back to school. She returned to college at age 60 to get a degree in Biblical Foundations from Multinomah University, and has a passion for seeing people engaged in the Word of God. Ellen has worked as a Community Pastor for Women at Summit View Church in Vancouver, Washington, and is a seasoned Bible student/teacher.  This picture was taken in Israel – A place she has visited multiple times and is dear to her heart.

Join us for a day set aside to grow in relationshi

⁣ ⁣Do you love these paintings as much as I do