My grandmother welcomed Jesus into her heart as she began to slip away from this world. She had been a hard-working nurse and mother of four. Widowed at a young age, she did not know what she did not know raising her young children. She did not know to guard their hearts from that which would seek to destroy them. She did not have a life filled with experiencing a relationship with Jesus, but I do believe she saw God’s goodness from time to time – Through her children when they were young, through the grandchildren that adored her and through her daughter who met Jesus in her 20’s and began to change before her own mothers eyes.

That daughter was my mother – A woman who transformed the direction of our families’ spiritual legacy.

She did this by making the boldest of changes when she said yes to Jesus among friends, siblings, and neighbors who could not see what she could see in Him. My mother went against the status quo and gave her life to the Lord so she and her children could live a different kind of life. So we could find a life of joy, peace, faith, and hope – Rooted in an understanding of true love. She undertook the challenge of what it meant to guard her own heart and ours. I continue the process of building this kind of legacy by creating a home centered around Christ – That my children may know how valuable their hearts are and learn to guard them on their own. So they can jump off my shoulders to reach even greater heights.

The Castle & Its Sentry

I once heard a beautiful metaphor about guarding your child’s heart: “Build your castle strong and it will not crumble under attack.” In other words, guard your heart and you will not be destroyed by the things that would rob you of the life God has planned for you. It radically solidified my beliefs that this was my job with my children – To help build protection against influences that seek to destroy the goodness and purity of our children’s hearts.

Before becoming a mom I had spent over 25 years caring for other people’s children, learning about children, and studying human development. The heart is the center of the castle, the eyes and ears are the gates. Do you remember the little song from Sunday School? “Be careful little eyes what you see, be careful little ears what you hear.” While children are at home, parents are the keepers of the gate or sentry.  Webster defines a sentry as “any of the men of a military guard posted to guard against danger.” A sentry has three responsibilities. First, they are to watch for the enemy or sheep in wolf’s clothing. Second, when the castle is under attack, the sentry must close the gates. Thirdly and possibly most importantly, the sentry notifies the King’s commander when an intruder has entered.

When I was a girl I had a cousin who loved scary movies and I loved my cousin. So guess what I would watch when we were together? Yep. You guessed it. We were between 8-10 years old when we would go to our Grandmother’s house and spend the day running errands with her and playing outside. Our grandmother’s home was the home she had raised her children in. It was built in the 40’s with two stories and several bedrooms. Each bedroom had a small closet and was filled with all sorts of items from years of life including a bed left behind from each of the four children who were raised there. Three of whom were daughters who sewed. There were dress forms and sewing machines, boxes of fabric and other items that sparked the curiosity of young children. At times, several of her 13 grandchildren were in the house playing hide and seek together.  We loved her, so we loved her home. Unfortunately her house was broken into several times over the years. She was a nurse who lived on her own and worked nights. She had to put a special door on and she had loud feisty poodles on guard. This made for quite the setting for late night movies and wild imaginations.  So when she would go to bed we would stay awake and fill our minds and ultimately our hearts with what came across the television. Those characters made it into my heart and tried to haunt me for years. Leaving fear of places, situations and interactions. My parents had no idea we were watching these movies, no blame is to be placed, nor did they know the fear that had entered me. The experience had left its mark on my heart and the enemy had invaded my “castle.”

Other invaders through movies are pornography, sexual activity in youth, drugs, violence, and death. The lack of the value of life seeps in so quickly when your mind is numbed over time to the darkness of media through your eyes and ears. It makes me think of a movie where a man is sent by the enemy masquerading as friend. His chief purpose is to whisper evil into the ear of the king. As time passes and the words seep into his heart, the king begins to age and rot as he sits on the throne. Day by day the filth that is being spoken into him manifests on the outside as a once vibrant King begins to shrink on his throne. His beautiful blond hair turns stringy grayish white (not the beautiful salon style we see on models today) and his body grows weak.  The viewer can watch the damage done when an outsider who seeks to destroy goes after the heart to tear down the man. It is a guard who recognizes the strategy and does not give up attempting to rid the evil one from the kingdom.

As the mother of two teenagers I am glad I learned this while they were young. I am glad that God showed me the connection between what goes in and what comes out.

Raising children to be solid and strong and in love with God is hard in this world of temptation and media all around them, but what I think would be even harder is to let them choose at a young age to listen or watch whatever they desire and then try and work in reverse to “clean it out” as it comes out of them with age. I am the guard of my child’s castle, and the sentry of our home.

Dear mom, we are human. We are not perfect. We are tired. We are weary. We are distracted.

We are also not alone on the journey of Motherhood.

The God of Abraham, Isaac and Moses is our same God. He can give us the wisdom, energy and discipline to guard our children’s hearts. I challenge and encourage you to sit with Him today. Ask Him for courage if you need to better guard or change some things in your home, energy and wisdom to be more intentional with schedules or influences, and the desire to look at what is going into your children now that could come back and haunt them or derail them later. Put on your armor, take your position and stand guard.

“And we know that in all things God works for the good of those who love him.” Romans 8:28 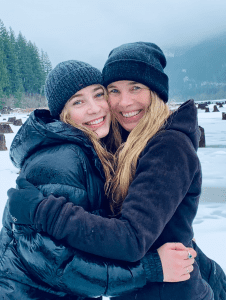 Hi I’m Jen. I’m a friend of Jesus. Daughter of the Most High. Wife to my boyfriend and Mama to two miracles. I am a teacher by trade & at heart. I love the mountains, all creation and seeing light bulbs go off in people’s minds and faces as they learn and experience God’s love for them.

A Season of Surrender – Ideas and Resources For Observing Lent
Podcast 033: “Surrender, Trust, and Rest: Unexpected Lessons From an Unexpected Senior Year” with Molly Tuffnell

TOMORROW! 🎉🔥⁣ ⁣ We are so encouraged tha

Who’s coming to Fire + Fellowship?! ⁣ ⁣ We a

A part of being a true Collective is the ability t

“If a brother or sister is poorly clothed and la

I could sit here and try to write the perfect Good

“As I watched the daily procession of my pen pal

⁣ Save the date!!! ⁣ ⁣ Join us for an evenin