The God Who is Sovereign

It’s important for us to know the attributes of God so that we may intimately know WHO God is. When our feelings, the hardships, and loss in life come and don’t seem to align with who we think He is, the TRUTH of WHO scripture says God is will always bring us back to a place of peace and rest in our all-knowing and sovereign Creator.

In the very beginning of time God spoke and therefore it was. He spoke the world and all that is in the world into existence.

In the beginning, God created and because He created and has always been, this establishes His supreme authority over everything. God is the “sovereign Lord of all by an incontestable right” as our Creator. God must be sovereign to be truly God. We wouldn’t want a God who wasn’t.

The God Who Acts

That’s the difference between the creation and the Creator. God’s sovereignty means that there are no limits on His authority to act. He is in control of all things and His perfect plans are being exacted. We see this all over scripture, for example, when we look at how God used Pharaoh to further His Kingdom work.

For the Scripture says to Pharaoh, “For this very purpose I have raised you up, that I might show my power in you, and that my name might be proclaimed in all the earth.”

He didn’t raise up Pharaoh to just be mean to the Israelites. He had a grand plan – a sovereign plan for how He would provide a Savior and how His name might be proclaimed in all the earth.

Let’s not forget how God worked in Joseph’s life. Joseph was the youngest son of many. He was favored by His father and despised by his brothers. He was sold into slavery at a young age as a result of his brothers’ hatred. He was then a slave in Potiphar’s house, but in this circumstance, he was put in a position that would eventually help in reuniting him with his family and give him the ability to help them.

I’m sure that during this process Joseph questioned how God could possibly use any of this for good.

How could God’s ultimate plan unfold in the midst of this betrayal and pain?

But there is a far grander picture here of God’s work through Joseph’s life. Something that was sovereignly ordained before the beginning of time. God is not just saving the Egyptians and Joseph’s family from starvation and ultimately physical death, He is keeping a covenant promise to Abraham through Joseph’s life story.  Joseph’s life seems to be full of unfortunate events, but ultimately God reveals his plan to provide an inheritance – One that leads to salvation.

He remembers his covenant forever,
the word that he commanded, for a thousand generations,
the covenant that he made with Abraham,
his sworn promise to Isaac,
which he confirmed to Jacob as a statute,
to Israel as an everlasting covenant,
saying, “To you I will give the land of Canaan
as your portion for an inheritance.”
When they were few in number,
of little account, and sojourners in it,
wandering from nation to nation,
from one kingdom to another people,
he allowed no one to oppress them;
he rebuked kings on their account,
saying, “Touch not my anointed ones,
do my prophets no harm!”
When he summoned a famine on the land
and broke all supply of bread,
he had sent a man ahead of them,
Joseph, who was sold as a slave.
His feet were hurt with fetters;
his neck was put in a collar of iron;
until what he had said came to pass,
the word of the LORD tested him.
The king sent and released him;
the ruler of the peoples set him free;
he made him lord of his house
and ruler of all his possessions,
to bind his princes at his pleasure
and to teach his elders wisdom.

The God Who Sustains

Through this process, even the unthinkable things Joseph went through, God was keeping the covenant and was sustaining the line of Seth regarding the ‘seed of the woman’ who will triumph over Satan. God was fully executing His sovereign plan to provide a rescuer and a way for salvation as Jesus would come through this lineage.

Even when faced with adversity, Joseph tells his brothers “You meant this for evil, but God meant it for good” (Genesis 50:20).  Joseph truly had an eternal perspective with his life circumstances. His faith was commended by the writer of Hebrews.

“By faith Joseph, at the end of his life, made mention of the exodus of the Israelites and gave direction concerning his bones.”  Hebrews 11:22

Wendy Alsup explains it this way in her book The Gospel-Centered Woman: Understanding Biblical Womanhood through the Lens of the Gospel:

…when the author of Hebrews references Jospeh in the Hall of Faith in Hebrews 11, it is Joseph’s conviction that God was doing something that transcended Joseph’s lifetime for which he is commended. Joseph had such confidence that God’s purposes for His children transcended their current struggles and that they were all a part of something eternal that he gave direction concerning his bones.

The God Who Saves

Joseph had a God-given faith and believed that God would make good out of his life story, and God, in His sovereignty, ultimately fulfills the Abrahamic covenant and provides a rescuer, Jesus, to make a way for salvation.

These are all wonderful and great stories, and we can see the bigger picture now because we have the Bible. We can see God’s promise of a Savior provided through Abraham’s lineage fulfilled.

But what about now, when things happen in our very own lives? Things that cause us to question and doubt God’s goodness and sovereignty? What about when we desire to have a spouse, a baby, a healthy child, a living parent, a forever friend, a body free of cancer, that job we’ve been wanting, and they never come when planned? Or they never ever come at all?

And in an even broader sense, not just in our personal lives but in huge current day events?  Throughout history, there have been things we do not fully understand, but we can rest in the fact that God is sovereign over it all whether we see His plan play out or not in our lifetime. Things like abortion, the Holocaust, politicians being elected to office, and the rise and fall of empires. God’s word attests to this in Proverbs 21:1:

The king’s heart is a stream of water in the hand of the LORD; he turns it wherever he will.

We so badly want to be in control of our lives, and we want it to contribute to our life story in some specific and positive way, when in fact God is the sovereign one who is in control of all things and is executing His sovereign plan to further His kingdom for eternity.

This God—his way is perfect; the word of the LORD proves true; he is a shield for all those who take refuge in him.

His ways ARE perfect, even when they don’t feel perfect to us.

What shall we say then? Is there injustice on God’s part? By no means! For he says to Moses, “I will have mercy on whom I have mercy, and I will have compassion on whom I have compassion.” So then it depends not on human will or exertion, but on God, who has mercy. For the Scripture says to Pharaoh, “For this very purpose I have raised you up, that I might show my power in you, and that my name might be proclaimed in all the earth.” So then he has mercy on whomever he wills, and he hardens whomever he wills. You will say to me then, “Why does he still find fault? For who can resist his will?” But who are you, O man, to answer back to God? Will what is molded say to its molder, “Why have you made me like this?” Has the potter no right over the clay, to make out of the same lump one vessel for honorable use and another for dishonorable use?

God has a way of reestablishing His authority in our lives through life circumstances as sovereign Creator and King. When we come to the end of ourselves and to the end of our plans and realize that we are eternal beings made for His glory alone and are not the ones in ultimate control, we can rest in the Lord’s sovereignty over our lives and even over our sin.

The God Who Redeems

He has lavished us with grace and granted us redemption as a part of His perfect plan to unite all things to Himself for our goodness and His ultimate glory.

In him we have redemption through his blood, the forgiveness of our trespasses, according to the riches of his grace, which he lavished upon us, in all wisdom and insight making known to us the mystery of his will, according to his purpose, which he set forth in Christ as a plan for the fullness of time, to unite all things in him, things in heaven and things on earth. In him we have obtained an inheritance, having been predestined according to the purpose of him who works all things according to the counsel of his will, so that we who were the first to hope in Christ might be to the praise of his glory. In him you also, when you heard the word of truth, the gospel of your salvation, and believed in him, were sealed with the promised Holy Spirit, who is the guarantee of our inheritance until we acquire possession of it, to the praise of his glory.

May we be women of the Word, living from a place of confidence in who we know God is instead of what or how we feel things should be.  May we learn to stretch and grow into the story He has written for our lives even when they don’t line up with the story we wrote for ourselves.  May God continue to grow our faith through each decade as we know He works all things for our good and for His glory alone.

How should the knowledge that God is sovereign change the way that you live?

In what area do you feel the most out of control?

How does the truth of God’s sovereignty comfort you personally?

How does it shape your understanding of the miracle of salvation? 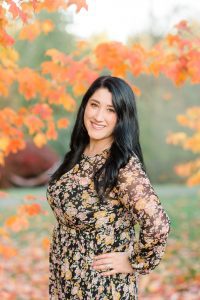 About the Author: Janell Sorensen is a follower of Jesus, a wife to her best friend David, and a mother to five gifts. She has a heart for women, women’s ministry, and the study of God’s Word. You can find her most days sitting at her farm table schooling her kids, telling punny jokes, and resting in the beauty and grace of her race because of Jesus. She occasionally writes at janellsorensen.wordpress.com.

Podcast 022 – “He Will” Advent Study – Week One with Eryn Kesler & Mary Straker
The Sovereignty of God: Deliverance in the Midst of Our Trials

Details and links are now LIVE on our website 🙌

Mark your calendars for this upcoming (no homework

How is everyone doing with Week One of the “He W